Excerpts from Will Rogers Cookbook, edited by Donna Raymond: 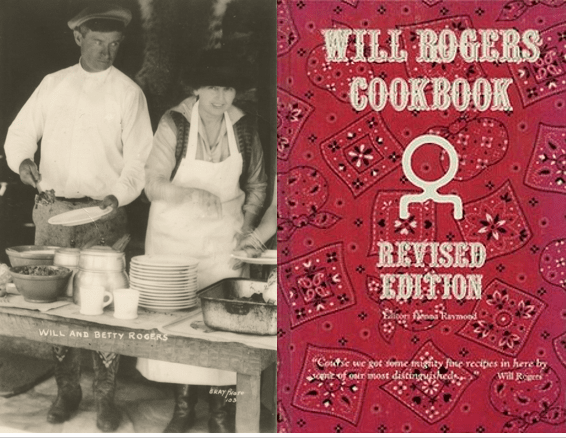 “I am a fair eater,” [Will Rogers] admitted on his April 27, 1930, radio broadcast, “I don’t eat correctly, but I eat a lot.” Though a publicly confessed hardy eater, Will was neither a gourmet nor a gourmand. During his career he was feted at many an urbane banquet table; he was invited by magnates, millionaires and world leaders; he ate at the White House and he dined with nobility, yet he never developed an appetite for any of society’s haute cuisine.

It was not that he was unfamiliar with so-called sophisticated delicacies and international dishes; he had tasted most of them from caviar in Russia to bird’s nest soup in China, from pheasant under glass in France to baked Alaska at the Waldorf-Astoria. In that respect he was unlike Tom Mix, the famous cowboy star. Mix, so it was reported, said after a dinner given in his honor at the Astor Hotel in New York City: “I et for two hours and didn’t recognize a thing I et except an olive.”

Despite the adulation of an era, despite riches and fame, despite familiarity with around-the-world cookery, Will Rogers’ life and diet stayed rather basic. It has been said that you can take the boy out of the country, but you can’t take the country out of the boy. Will Rogers, the world’s first multi-media super-star, part cowboy, part Indian, lived his simple philosophy: “I am just an old country boy in a big town trying to get along. I have been eating pretty regular, and the reason I have been is because I have stayed an old country boy.”

Here are some selected recipes for the season from the Will Rogers Cookbook:

Submitted by Mr. Emil Sandmeier who worked for the Rogers family for many years and reports that very simple dishes were cooked at the Ranch House.

Mix together the above ingredients.

“The day I roped Betty, I did the star performance of my life.” – Will Rogers